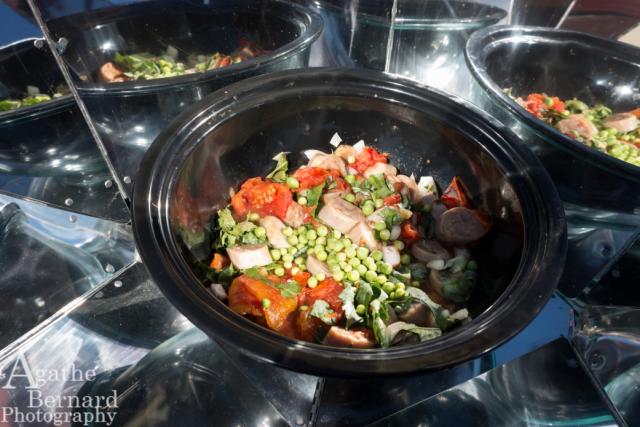 Have you ever thought about cooking only using the sun? More that 60 local residents and tourists learned that solar cooking is fun and simple, as long as you have enough sunshine. The three-hour cooking demonstration, organized by the North Columbia Environmental Society’s Sustainable Living Committee, took place outside Big Mountain Kitchen on Mackenzie Avenue last Saturday, July 18.

Solar cooking instructor, Laura Stovel, has been cooking exclusively with solar energy as part of an off-the-grid challenge this summer. Stovel also demonstrated several manual appliances — a manual food processor, spiralizer and coffee grinder — that she uses often during this two-month challenge.

Solar cooking is like slow cooking. You just throw food into the black metal bowl of the cooker, cover it up and it should be ready within a few hours. The key is to use less liquid than the recipe would usually call for and don’t lift the cooker lid, which lets the heat escape. Solar meals don’t burn and they don’t need frequent stirring — maybe one stir every 1 1/2 hours just to mix the flavours.

The turkey sausage stew and red rice that Stovel cooked at the demonstration each took about 2 1/2 hours to prepare. Larger pieces of meat take more time — up to six or seven hours, depending on the cut and the intensity of the heat. It’s advisable to use an oven thermometer to check whether larger cuts of meat are safe to eat.

Be sure to use oven mitts when handling the cooker as it gets very hot.

-One onion, chopped into small pieces

Mix the ingredients together. Put in the black pot or bowl of the cooker. Put the lid on and leave it until it is cooked. You will need to point the cooker towards the sun and adjust it about every hour or so.