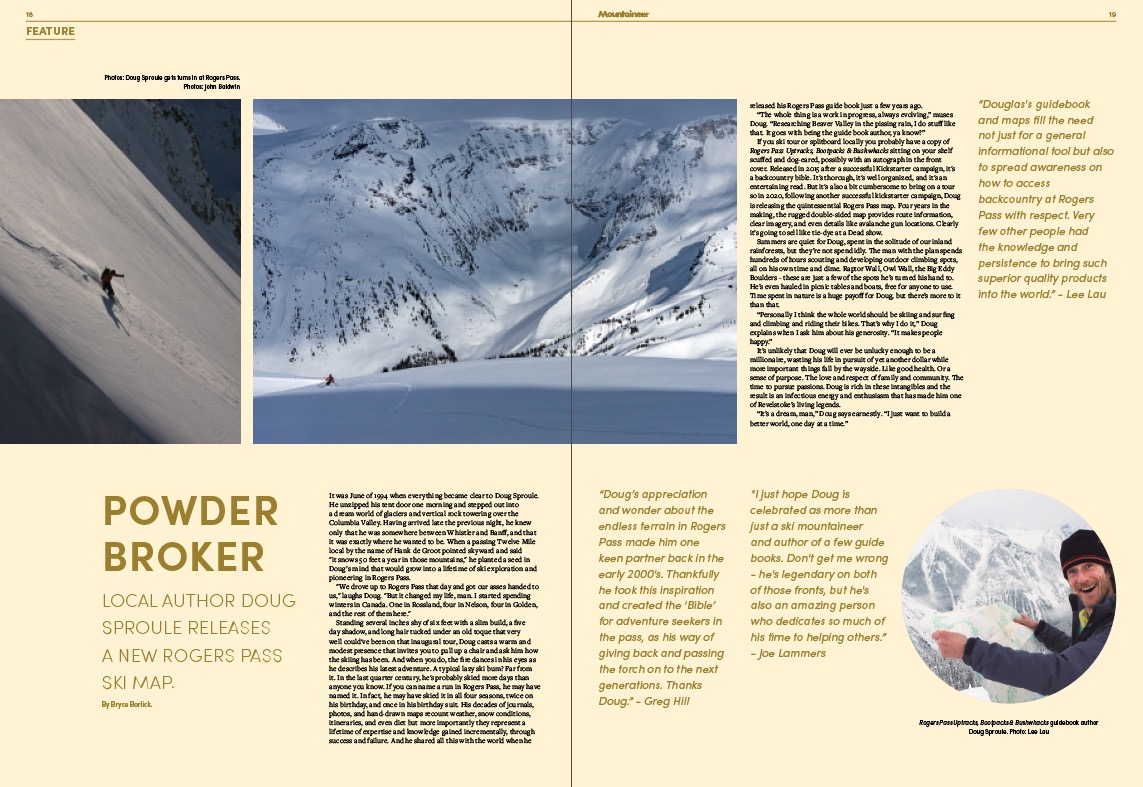 This story first appeared in the February 2020 issue of the Revelstoke Mountaineer Magazine.

It was June of 1994 when everything became clear to Doug Sproul. He unzipped his tent door one morning and stepped out into a dream world of glaciers and vertical rock towering over the Columbia Valley. Having arrived late the previous night, he knew only that he was somewhere between Whistler and Banff, and that it was exactly where he wanted to be. When a passing Twelve Mile local by the name of Hank de Groot pointed skyward and said “it snows 50 feet a year in those mountains,” he planted a seed in Doug’s mind that would grow into a lifetime of ski exploration and pioneering in Rogers Pass.

“We drove up to Rogers Pass that day and got our asses handed to us,” laughs Doug. “But it changed my life, man. I started spending winters in Canada. One in Rossland, four in Nelson, four in Golden, and the rest of them here.”

Standing several inches shy of six feet with a slim build, a five day shadow, and long hair tucked under an old toque that very well could’ve been on that inaugural tour, Doug casts a warm and modest presence that invites you to pull up a chair and ask him how the skiing has been. And when you do, the fire dances in his eyes as he describes his latest adventure. A typical lazy ski bum? Far from it. In the last quarter century, he’s probably skied more days than anyone you know. If you can name a run in Rogers Pass, he may have named it. In fact, he may have skied it in all four seasons, twice on his birthday, and once in his birthday suit. His decades of journals, photos, and hand-drawn maps recount weather, snow conditions,itineraries, and even diet but more importantly they represent a lifetime of expertise and knowledge gained incrementally, through success and failure. And he shared all this with the world when he released his Rogers Pass guide book just a few years ago.

“The whole thing is a work in progress, always evolving,” muses Doug. “Researching Beaver Valley in the pissing rain, I do stuff like that. It goes with being the guide book author, ya know?”

If you ski tour or splitboard locally you probably have a copy of Rogers Pass Uptracks, Bootpacks & Bushwhacks sitting on your shelf scuffed and dog-eared, possibly with an autograph in the front cover. Released in 2015 after a successful Kickstarter campaign, it’s a backcountry bible. It’s thorough, it’s well organized, and it’s an entertaining read. But it’s also a bit cumbersome to bring on a tour so in 2020, following another successful kickstarter campaign, Doug is releasing the quintessential Rogers Pass map. Four years in the making, the rugged double-sided map provides route information, clear imagery, and even details like avalanche gun locations. Clearly it’s going to sell like tie-dye at a Dead show.

Summers are quiet for Doug, spent in the solitude of our inland rainforests, but they’re not spend idly. The man with the plan spends hundreds of hours scouting and developing outdoor climbing spots, all on his own time and dime. Raptor Wall, Owl Wall, the Big Eddy Boulders – these are just a few of the spots he’s turned his hand to.

He’s even hauled in picnic tables and boats, free for anyone to use. Time spent in nature is a huge payoff for Doug, but there’s more to it than that.

“Personally I think the whole world should be skiing and surfing and climbing and riding their bikes. That’s why I do it,” Doug explains when I ask him about his generosity. “It makes people happy.”

It’s unlikely that Doug will ever be unlucky enough to be a millionaire, wasting his life in pursuit of yet another dollar while more important things fall by the wayside. Like good health. Or a sense of purpose. The love and respect of family and community. The time to pursue passions. Doug is rich in these intangibles and the result is an infectious energy and enthusiasm that has made him one of Revelstoke’s living legends.

“It’s a dream, man,” Doug says earnestly. “I just want to build a better world, one day at a time.”