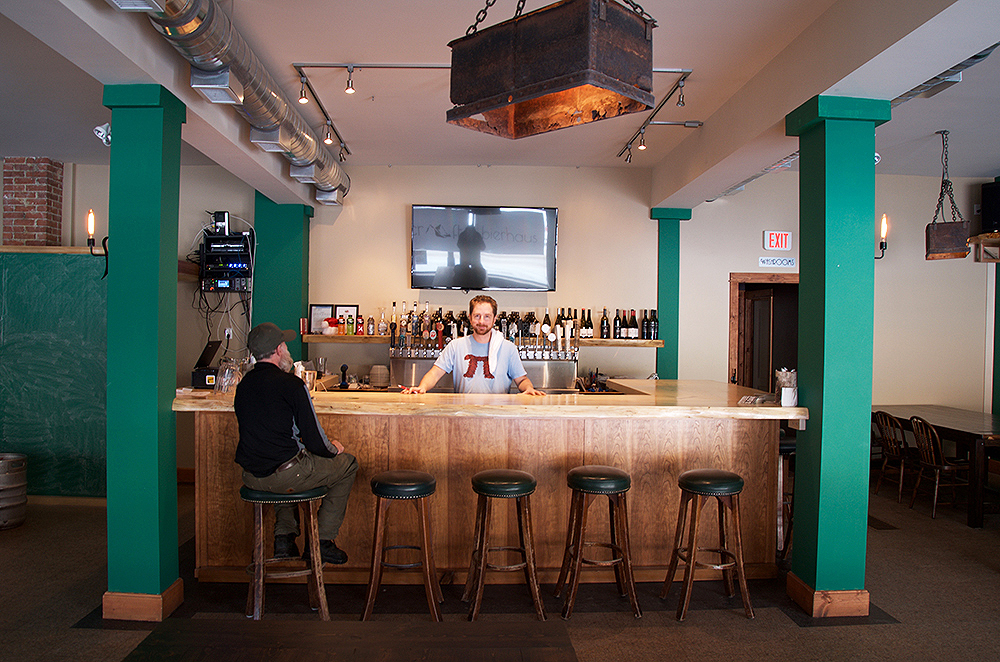 The kitchen at Revelstoke’s Craft Bierhaus has been completely upgraded to professional equipment, and chef Sean Whalen is putting out great food

Revelstoke is in the midst of a restaurant revival, with several new establishments either newly opened or opening soon. One of the standouts of the new wave is the Craft Bierhaus.

With about two dozen taps featuring craft beers from across B.C. and the U.S. Pacific Northwest, it’s a safe bet that beer aficionados are going to be happy about the new Craft Bierhaus selection. More about the beer in a minute.

The standout for me was the menu — chef Sean Whalen aspires to raise the Revelstoke dining game with well fine, well executed dishes at affordable casual dining prices.

On my first visit, the filo wrapped chicken on a mushroom risotto was great. On New Year’s Eve, we tried the short ribs in a craft beer sauce. They were both standouts that are really competitively priced compared to average prices in Revelstoke.

Their salad selection also steps it up. Their honey-fried goat cheese & arugula salad topped with mango ranch dressing was another hit.

Whalen also creates a line of macaroni and cheese dishes, and they plan to expand into communal eating, such as gathering groups at the large tables to share a roast. Roberts takes inspiration from Houston-based restaurant Underbelly, which revels in the shared eating experience.

“I am trying to promote more of a communal atmosphere, where everyone chips something in,” Roberts said.

A total behind the scenes makeover of the Craft Bierhaus (formerly Benoit’s Wine Bar, then briefly the Taco Club), has made this possible.

Owner Trevor Roberts toured me through the completely renovated kitchen and impressive beer cellar. Roberts is originally from Alberta, but he’s spent many years working abroad as an energy trader, most recently in Austin and Houston where the craft beer revolution started earlier than in Canada. When the oil patch woes struck, Roberts lost his job, and wound up in Revelstoke on New Year’s Day 2015, and skied for the next 80-ish days, fell in love with the place and decided to get into the restaurant business. He saw an opportunity in the craft beer scene, and decided to import concepts from southern cuisine he experienced in the U.S.

Back to the beer. Roberts says he wants you to try something new. Go to the bar and tell them what kind of beer you like, and they’ll turn you on to a craft beer.

“What I am trying to do is personalize the beer experience,” Robert explains. “I am trying to introduce people to what is great and can be great.”

There are dozens of kegs downstairs in his new cooler, which is decked out with a complicated maze of tubes. He showed me a valve system that mixes carbon and nitrogen optimally, depending on the beer. Some of the breweries are familiar, others are new to Revelstoke taps — Driftwood, Townsite, Category 12, Persephone, Parallel 49, Crannog, Breakside, pFriem, Ninkasi, Mount Begbie Brewing Co., and Steel & Oak to name a few. The offerings will vary over time.

“I just know what I like to drink, and I just try to represent each of the progressive beer categories, or beer types,” Roberts said. “I want to be able to have a similar type of flavour profile on each tap so the beer is approachable for someone who wants a brown ale, [for example.]”

The beers are available in taster glasses and you can try a selection before settling on something you like.

“I tried to really grab some of the best small breweries in the Lower Mainland,” Roberts said. “Just feature stuff that I thought was unique, and wasn’t available here. What I am finding is people are quietly impressed.”

Roberts is very positive on Revelstoke’s future, and believes it will attract investment from those who see it grow as an extreme mountain sports mecca. He’s obviously invested a lot in Craft Bierhaus.

[I saw the kitchen before the upgrade, and it wasn’t much more than a home kitchen. Roberts has obviously spent a small fortune upgrading, and Revelstoke food lovers benefit.

The front end has also been renovated, dominated by an Engelmann spruce bar that was sourced, milled and installed locally.

“People told me I was crazy,” he joked about getting into the restaurant business. But after only a few days open, he was scrambling to resupply after draining 42 of the 50 kegs on hand. “I am right that Revelstoke can and will support this.”

It seems so. The Craft Bierhaus has been hopping since it opened just before Christmas.