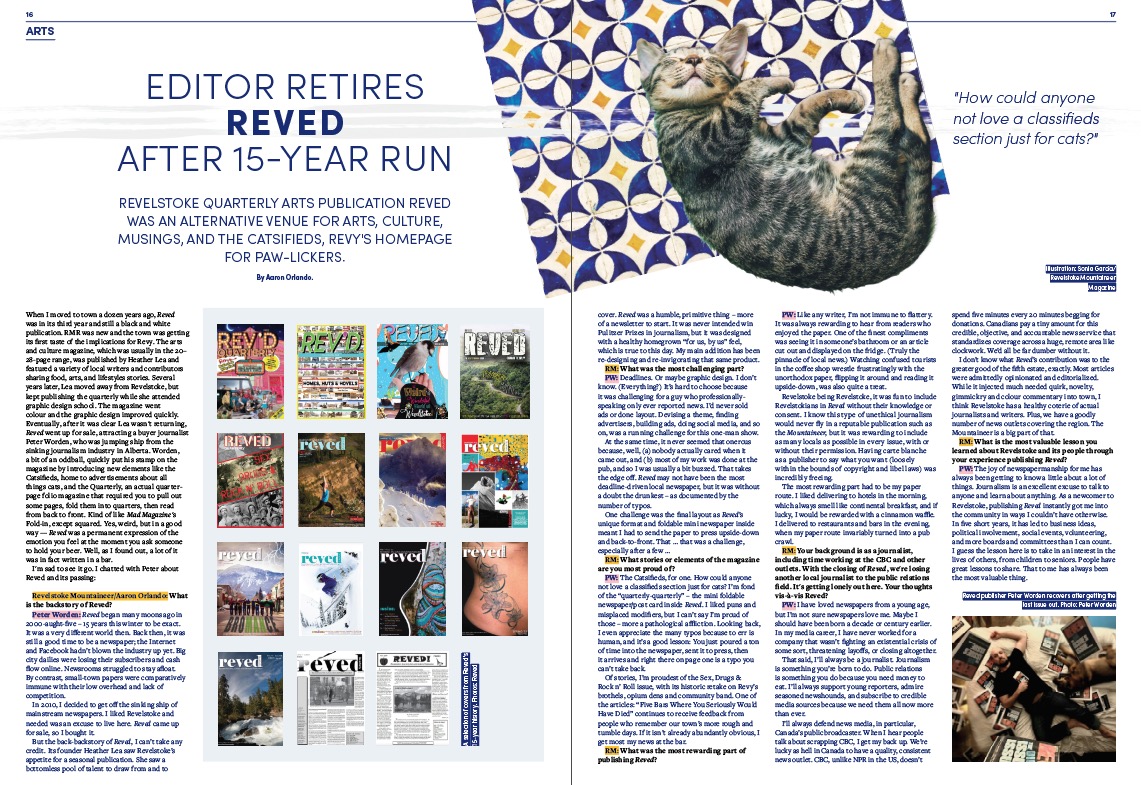 This article first appeared in print in the February 2020 issue of Revelstoke Mountaineer Magazine.

When I moved to town a dozen years ago, Reved was in its third year and still a black and white publication. RMR was new and the town was getting its first taste of the implications for Revy. The arts and culture magazine, which was usually in the 20–28-page range, was published by Heather Lea and featured a variety of local writers and contributors sharing food, arts, and lifestyles stories. Several years later, Lea moved away from Revelstoke, but kept publishing the quarterly while she attended graphic design school. The magazine went colour and the graphic design improved quickly. Eventually, after it was clear Lea wasn’t returning, Reved went up for sale, attracting a buyer journalist Peter Worden, who was jumping ship from the sinking journalism industry in Alberta. Worden, a bit of an oddball, quickly put his stamp on the magazine by introducing new elements like the Catsifieds, home to advertisements about all things cats, and the Quarterly, an actual quarter-page folio magazine that required you to pull out some pages, fold them into quarters, then read from back to front. Kind of like Mad Magazine‘s Fold-in, except squared. Yes, weird, but in a good way — Reved was a permanent expression of the emotion you feel at the moment you ask someone to hold your beer. Well, as I found out, a lot of it was in fact written in a bar with a beer in hand.

I’m sad to see it go. I chatted with Peter about Reved and its retirement:

Peter Worden: Reved began many moons ago in 2000-aught-fi ve – 15 years this winter to be exact. It was a very different world then. Back then, it was still a good time to be a newspaper; the Internet and Facebook hadn’t blown the industry up yet. Big city dailies were losing their subscribers and cash flow online. Newsrooms struggled to stay afloat. By contrast, small-town papers were comparatively immune with their low overhead and lack of competition.

In 2010, I decided to get off the sinking ship of mainstream newspapers. I liked Revelstoke and needed was an excuse to live here. Reved came up for sale, so I bought it.

But the back-backstory of Reved, I can’t take any credit. Its founder Heather Lea saw Revelstoke’s appetite for a seasonal publication. She saw a bottomless pool of talent to draw from and to of a newsletter to start. It was never intended win Pulitzer Prizes in journalism, but it was designed with a healthy homegrown “for us, by us” feel,which is true to this day. My main addition has been re-designing and re-invigorating that same product.

RM: What was the most challenging part?

PW: Deadlines. Or maybe graphic design. I don’t know. (Everything?) It’s hard to choose because it was challenging for a guy who professionally speaking only ever reported news. I’d never sold ads or done layout. Devising a theme, finding advertisers, building ads, doing social media, and so on, was a running challenge for this one-man show.

At the same time, it never seemed that onerous because, well, (a) nobody actually cared when it came out, and (b) most of my work was done at the pub, and so I was usually a bit buzzed. That takes the edge off. Reved may not have been the most deadline-driven local newspaper, but it was without a doubt the drunkest – as documented by the number of typos.

One challenge was the final layout as Reved’s unique format and foldable mini newspaper inside meant I had to send the paper to press upside-down and back-to-front. That … that was a challenge, especially after a few …

RM: What stories or elements of the magazine are you most proud of?

PW: The Catsifieds, for one. How could anyone not love a classifieds section just for cats? I’m fond of the “quarterly-quarterly” – the mini foldable newspaper/post card inside Reved. I liked puns and misplaced modifiers, but I can’t say I’m proud of those – more a pathological affliction. Looking back, I even appreciate the many typos because to err is human, and it’s a good lesson: You just poured a ton of time into the newspaper, sent it to press, then it arrives and right there on page one is a typo you can’t take back.

Of stories, I’m proudest of the Sex, Drugs & Rock n’ Roll issue, with its historic retake on Revy’s brothels, opium dens and community band. One of the articles: “Five Bars Where You Seriously Would Have Died” continues to receive feedback from people who remember our town’s more rough and tumble days. If it isn’t already abundantly obvious, I get most my news at the bar.

RM: What was the most rewarding part of publishing Reved?

PW: Like any writer, I’m not immune to flattery. It was always rewarding to hear from readers who enjoyed the paper. One of the finest compliments was seeing it in someone’s bathroom or an article cut out and displayed on the fridge. (Truly the pinnacle of local news.) Watching confused tourists in the coffee shop wrestle frustratingly with the unorthodox paper, flipping it around and reading it upside-down, was also quite a treat.

Revelstoke being Revelstoke, it was, it was fun to include Revelstokians in Reved without their knowledge or consent. I know this type of unethical journalism

would never fly in a reputable publication such as the Mountaineer, but it was rewarding to include as many locals as possible in every issue, with or without their permission. Having carte blanche as a publisher to say what you want (loosely within the bounds of copyright and libel laws) was incredibly freeing.

The most rewarding part had to be my paper route. I liked delivering to hotels in the morning, which always smell like continental breakfast, and if lucky, I would be rewarded with a cinnamon waffle. I delivered to restaurants and bars in the evening, when my paper route invariably turned into a pub crawl.

RM: Your background is as a journalist, including time working at the CBC and other outlets. With the closing of Reved, we’re losing another local journalist to the public relations field. It’s getting lonely out here. Your thoughts vis-à-vis Reved?

PW: I have loved newspapers from a young age, but I’m not sure newspapers love me. Maybe I should have been born a decade or century earlier. In my media career, I have never worked for a company that wasn’t fighting an existential crisis of some sort, threatening layoffs, or closing altogether.

That said, I’ll always be a journalist. Journalism is something you’re born to do. Public relations is something you do because you need money to eat. I’ll always support young reporters, admire seasoned newshounds, and subscribe to credible media sources because we need them all now more than ever.

I’ll always defend news media, in particular, Canada’s public broadcaster. When I hear people talk about scrapping CBC, I get my back up. We’re lucky as hell in Canada to have a quality, consistent news outlet. CBC, unlike NPR in the US, doesn’t spend five minutes every 20 minutes begging for donations. Canadians pay a tiny amount for this credible, objective, and accountable news service that standardizes coverage across a huge, remote area like clockwork. We’d all be far dumber without it.

I don’t know what Reved’s contribution was to the greater good of the fifth estate, exactly. Most articles were admittedly opinionated and editorialized. While it injected much needed quirk, novelty, gimmickry and colour commentary into town, I think Revelstoke has a healthy coterie of actual journalists and writers. Plus, we have a goodly number of news outlets covering the region. The Mountaineer is a big part of that.

RM: What is the most valuable lesson you learned about Revelstoke and its people through your experience publishing Reved?

PW: The joy of newspapermanship for me has always been getting to know a little about a lot of things. Journalism is an excellent excuse to talk to anyone and learn about anything. As a newcomer to Revelstoke, publishing Reved instantly got me into the community in ways I couldn’t have otherwise. In five short years, it has led to business ideas, political involvement, social events, volunteering, and more boards and committees than I can count. I guess the lesson here is to take in an interest in the lives of others, from children to seniors. People have great lessons to share. That to me has always been the most valuable thing.