A City of Revelstoke committee looking into renovation plans for Grizzly Plaza will explore two proposed concepts for the renovation project at a June 8, 2022 meeting.

Option one: Move the gazebo to the front of the plaza

The first option would move the gazebo to the front of the plaza and replace the existing planters with new planters and more benches. The road would be narrowed and straightened. The plan calls for installing new bear sculptures on First Street.

Part of this concept suggests selling the two city-owned parking lots on Victoria Road for development.

Option two: A stage near First Street that splits into two pieces when not in use

The second option proposes creating a new stage that will straddle the street in two pieces when not in use, then be pushed together into one that sits in the middle of the road when in use.

The gazebo would remain in the same area, but it will also likely be removed and renovated.

Coun. Nicole Cherlet reached out to revelstokemountaineer.com to talk about the project. Here’s our interview from late May.

-Cherlet said trees would not be removed, something now in question due to a water line replacement.

-Cherlet said if the project exceeded the budget, it could done in phases. On the spot, Cherlet couldn’t say what the budget was.

Click on the SoundCloud link below to listen to Cherlet’s interview with revelstokemountaineer.com.

Read the minutes from the May 2022 meeting here

The Grizzly Plaza committee last met in May. See the minutes from that meeting here, including the committee’s preference for a modern aesthetic, including Indigenous history, and rejecting the idea of a water feature.

Read the minutes from a May 2022 Grizzly Plaza enhancement committee here.

In a video posted to the city’s YouTube page on May 27, Mayor Gary Sulz talks with committee chairperson Coun. Nicole Cherlet.

In a new development, according to the concept draft, there is a water pipe from 1929 that runs through the plaza on the Roxy Theatre side, meaning some trees on that side will need to be removed. It runs under the gazebo, so the “gazebo requires removal.” The planters and possibly the grizzly statue brickwork on Victoria Road.

The committee will look at options for new lighting in the plaza, including heritage styles or a modern wood post look.

The plan calls for the heritage clock and the bollards to be painted black. 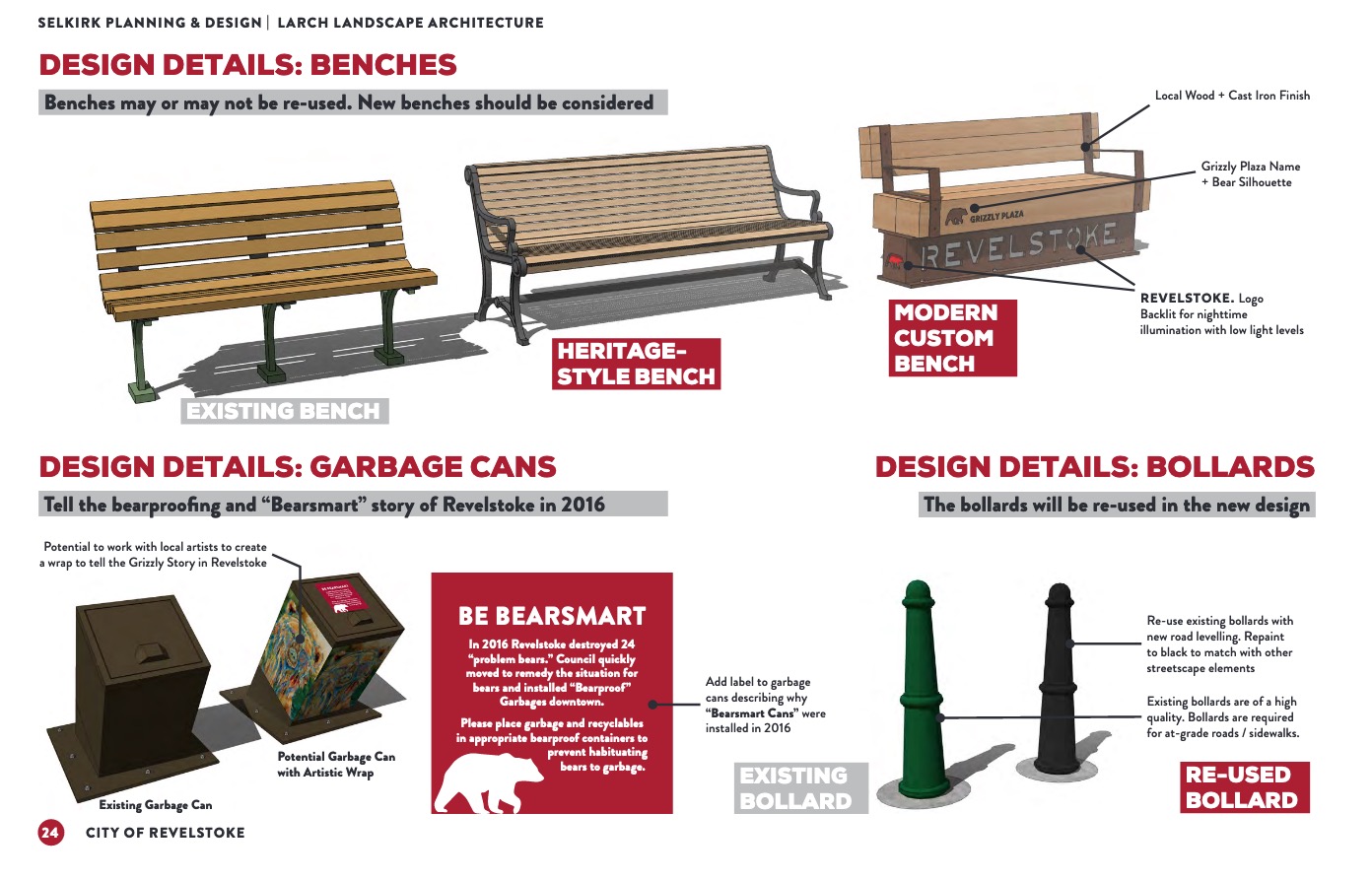 The concept plan calls for new benches and will explore a heritage look or a one with the new Revelstoke tourism branding.

What’s next? The Grizzly Plaza Enhancement committee looking into the project will meet at June 8, 2022 at 2 p.m. It’s a virtual Zoom meeting.

City of Revelstoke staff provided the following link to the enhancement committee meeting. City meetings are open to the public to attend and watch, although it’s not designed as a public engagement session.

The committee hopes to finalize a design plan by the end of June 2022.

Since publication on the morning of June 8, the city has since sent out an email notification that the Zoom meeting is cancelled, but it’s unclear if it has been. It has also now scheduled a YouTube broadcast of the meeting.

The City of Revelstoke has cancelled access to the Zoom meeting and is now broadcasting the meeting to its YouTube channel.

Here is the link to the YouTube broadcast, which starts at 2 p.m.:

This story has been updated to add details including the Zoom meeting link.