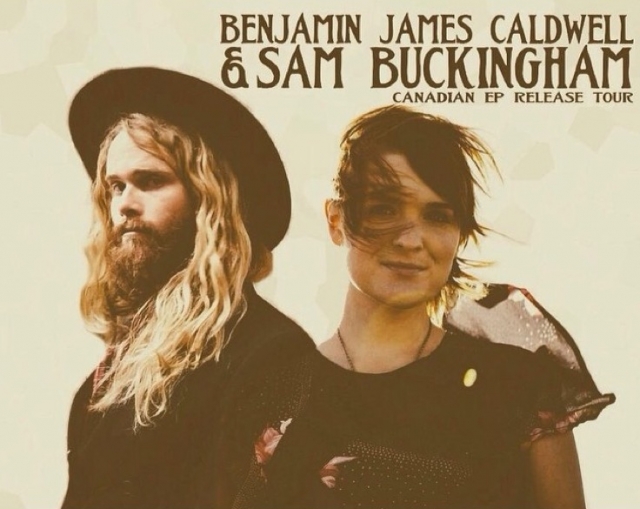 She’s on tour with Canadian singer and songwriter James J. Caldwell, where they’ll support their new EP, to be released soon.

In mid 2012, Sam Buckingham signed a deal with Alberts for worldwide publishing, alongside the likes of Gotye, Josh Pyke, and Ellie Goulding and went on to hone her songwriting throughout Nashville and New York, in preparation for recording her most recent long player ‘I’m A Bird’. Co produced with multiple ARIA winner Paul McKercher, the album explores ideas of traveling, asking questions, and breaking free from fear and expectation – a continuing theme in Buckingham’s most recent songwriting endeavours.

Her 2013 touring schedule followed a successful crowdfunding campaign where Buckingham raised funds through crowdfunding platform Pozible, to record ‘I’m A Bird’ which, soon after, was longlisted for the esteemed Australian Music Prize.

In 2014, Buckingham was invited to join Katie Noonan, Angie Hart & Melody Pool on the second ‘Songs That Made’ tour. The tour coincided with an album release of the same name, and Buckingham once again travelled to New York to record a haunting acoustic rendition of Phil Collins’ ‘Another Day in Paradise’ to contribute to the album, and joined the Australian tour in October and November. With all album profits given to the Cancer Council’s ‘Pink Ribbon Foundation’, Noonan, Hart, Pool and Buckingham collectively raised over $15,000 in physical album sales alone, while on tour.

Buckingham followed up in early 2015 with her ‘Down The Rabbit Hole’ tour, her 6th national tour playing predminantly house concerts alongside intimate public venues. In what has become an obvious show of grass roots commitment and true fan support, Buckingham has become a pioneer in the Australian independent music scene. She is self managed, books her own tours, is not signed to any record label and rarely enlists the help of third party publicists or the like. Yet, she has managed to perform at some of the country’s premier music fetivals, including Peats Ridge, Nannup, Blue Mountains and National Folk Festival, showcase at the International Folk Alliance, sign to the country’s premier independent publishing company and play alongside the likes of Angus & Julia Stone, Matt Corby, Kasey Chambers, Lior and Washington.

Currently based in Latin America and using her time there to explore different cultures, experiences and art forms while focuing on songwriting, Buckingham definitely practices what she preaches, allowing the unknown to be explored and the unexpected to become the norm. Late 2015 sees Buckingham embark on her first Canadian tour, then return home to prepare for creating the next album.